This article inspired the start of A Simple Gesture — Reston.

Starting a nonprofit in retirement doesn’t always require huge amounts of time and money. Jonathan Trivers runs a charity called A Simple Gesture, which has provided 500,000 pounds of free groceries to food pantries in 35 towns in the past three years.

And all it took was a good idea, a bit of organizing and the purchase of a few thousand reusable shopping bags.

“We knew there was plenty of food in our community to feed hungry families,” says Mr. Trivers, who retired to the Sierra foothills town of Paradise, Calif., in 2007 with his wife, Karen. “But there was just no easy way to get it to them.” 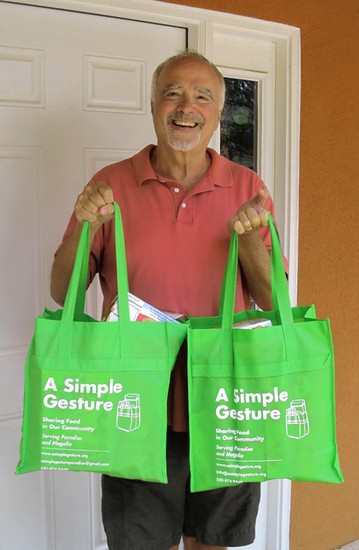 ‘People in the community were energized to help,’ says Mr. Trivers. Why this path? “There are hungry families in every community, and we made it easy for neighbors to help them.”

A Simple Gesture is based on a similar program run by the nonprofit Ashland Food Project in Ashland, Ore. Donors keep a reusable grocery bag in their kitchens, adding nonperishable food items such as soup, pasta and beans to the bag whenever they can. Every two months, donors leave the bags on their porches, and volunteers pick them up to deliver to food banks or soup kitchens.

In Paradise, 1,700 households have signed up for the program, which collects about 135,000 pounds of food annually. “By donating nonperishable items to the food pantries, we free the charities up to buy eggs, butter, milk, meat, fruit and vegetables,” Mr. Trivers says.

’Can It Be This Simple?’

At first, Mr. Trivers and his wife spent several hours a day getting Simple Gesture off the ground. They went door to door asking people to sign up, getting the word out at clubs and church groups, contacting food banks and doing all the pickups themselves.

But soon volunteers stepped up. One person offered to build a website. Others volunteered to be drivers. A farm donated an acre of land to the program, adding fresh produce to the bags.

“People in the community were energized to help, and now the program almost runs itself,” Mr. Trivers says. “As a businessperson used to the complexities of the corporate world, I asked myself, ‘Can it really be this simple to help others?’ And the answer is: Yes.”

Mr. Trivers spent most of his career in retail, first in merchandising at Sears and later as president of Abbey Carpet Co. There were also stops in Ashland, Ore., as a business professor at Southern Oregon University, and on an island in the Gulf of Mexico near Sarasota, Fla., as a consultant.

For their “first retirement,” the Triverses bought a 130-year-old farmhouse on 90 acres in Nova Scotia and ran a camp for economically disadvantaged children. They later relocated to California to be closer to their children and grandchildren. “We moved to Paradise to finally ‘retire,’ but we still felt called to give back,” says Mr. Trivers, who plans to keep running A Simple Gesture for many years.

Today, he and his wife spend their time promoting the idea to other small and midsize communities. So far, three dozen towns have jumped on the grocery-bag bandwagon, and the Triverses hope hundreds more will join.

“People want to help others,” Mr. Trivers says. “And sometimes, all you have to do is ask.”

Get your cool green bag and start helping our neighbors now!